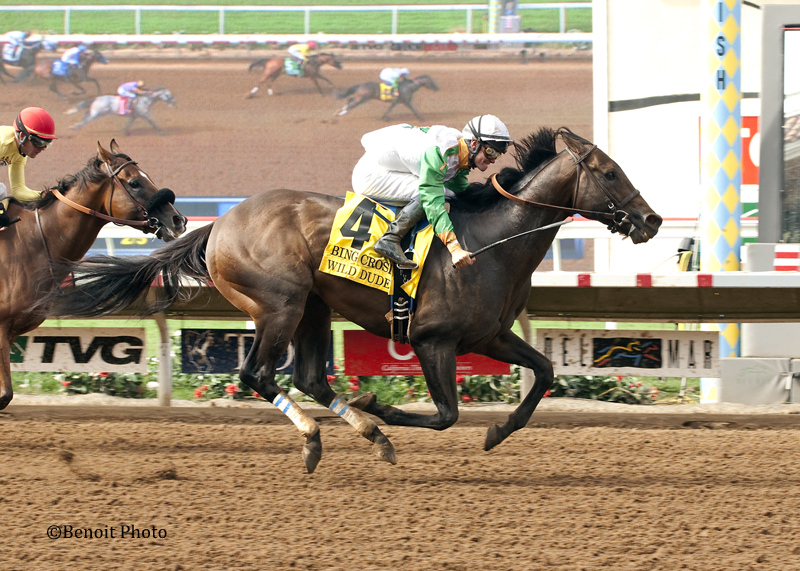 Wild Dude, dismissed at 11-1 odds by Del Mar bettors, overhauled 2-5 favored Masochistic in the final sixteenth of a mile to score a stunning upset in the featured Grade I $300,000 Bing Crosby Stakes Sunday.

With hot-riding Flavien Prat in the saddle, Wild Dude closely trailed Masochistic, who had taken the lead from the pacesetters, turning into the stretch and proved best through the lane to win by a length and one-quarter in 1:09.51 for the six furlongs.

Masochistic, a winner of six of eight lifetime starts and the number two ranked sprinter in America coming into the Bing Crosby Stakes, appeared to be in total command when he surged to the front under Tyler Baze in the upper stretch but he was unable to withstand the determined challenge of Wild Dude.

Kobe’s Back, the 4-1 second choice in the field of five sprinters, swerved at the break and was far back early under Gary Stevens but rallied to be a fast-closing third, a length and one-half behind Masochistic and a length and one-half in front of Caminetto. Distinctiv Passion completed the line-up in fifth. Appealing Tale was scratched after having finished second in Saturday’s San Diego Handicap.