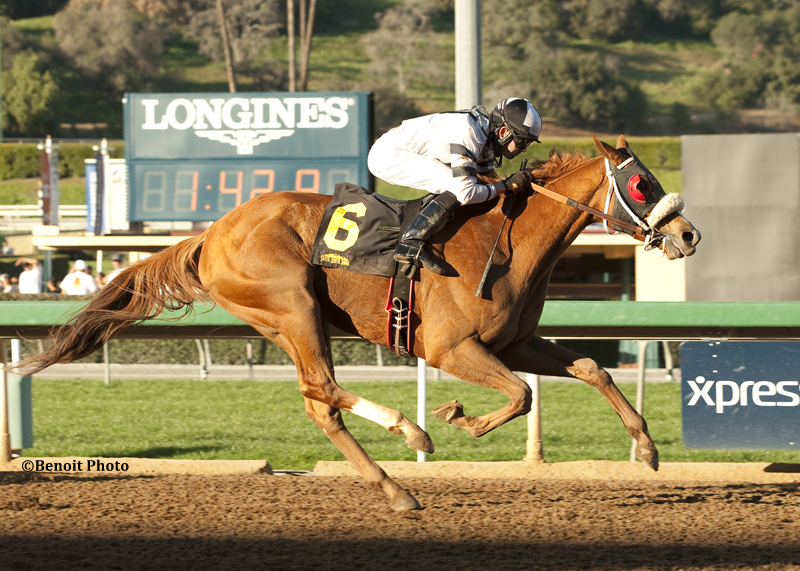 Although she was caught wide around both turns, Warren’s Veneda and jockey Tyler Baze rallied from off the pace to an emphatic 2 ¾ length win in Saturday’s Grade II, $200,000 Santa Maria Stakes at Santa Anita, as the California-bred daughter of Affirmative covered 1 1/16 miles in 1:43.18.

Trained by Craig Lewis and owned by her breeder, Benjamin C. Warren, Warren’s Veneda, who notched her second win in a row and got her first graded stakes victory, was the second choice in a field of eight older fillies and mares at 9-5 and paid $5.60, $3.40 and $2.60.

“I was on her when she broke her maiden a couple of years ago and I knew she was a nice filly then,” said Baze. “Going into the first turn I thought about taking her back and dropping her in, but I told myself to just have confidence and I knew she was the best in the field. I lost a little ground, which I really don’t like doing but she was the best. She amazes me, she’s just a great animal.”

“I guess when you’re the best horse, that’s what you do (go wide and win),” said Lewis. “It takes a very good horse to overcome that trip, but Tyler knew what he had and didn’t want to get stopped, so everything worked out well…She’s an Amazon…We’ll probably come back in the Santa Margarita (Grade I, $400,000 at 1 1/8 miles on March 14).”

Longshot Uzziel, who was ridden by Fernando Perez, sat a close third into the far turn and held favored Thegirlinthatsong safe by a length to finish second. The biggest price in the field at 52-1, Uzziel paid $38.40 and $11.60.

Thegirlinthatsong, who came off a 4 ¼ length win in the Grade II La Canada Stakes on Jan. 17, was a close fourth into and around the far turn under Rafael Bejarano and didn’t appear to have any excuses in running third. Off at 9-5, she paid $2.60 to show.

“She broke really well but I knew it wasn’t going to be the same race as last time,” said Bejarano, in reference to her handy score in the La Canada. “…There was a lot of speed today. I knew a few horses were going to show speed so I put her where she was comfortable, up close and I stayed three or four lengths behind. She made a run but Warren’s Veneda was much the best today.”