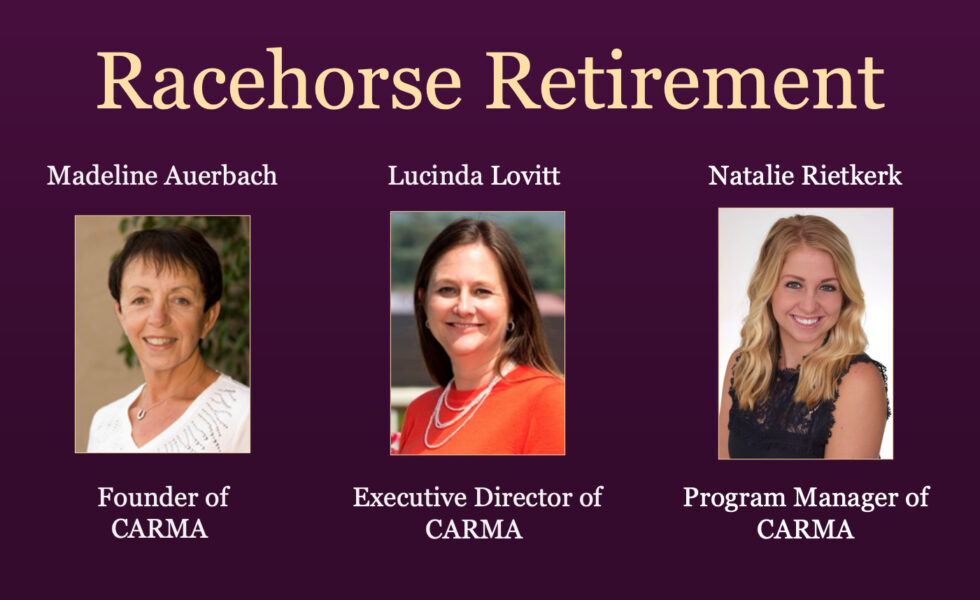 This event was aimed at helping educate horse owners on the retirement process and bring awareness to the importance of owners’ responsibilities in retiring their racehorses. CARMA also raises awareness and support through their events & fundraisers such as the Hoedown for Horses and their Thoroughbred Classic Horse Shows. For more information about CARMA, please visit their website at www.carma4horses.org.

Every horse to come through the Placement Program is its own success story, but a gelding named Dream Police is one of our most heartwarming stories. He is a 2012 gelding by Wildcat Heir who raced 27 times before retiring to our program. Most notably, Dream Police is a survivor of the Lilac Fire which devastated San Luis Rey Downs Training Center in December 2017. If you followed that news story, you’ve seen the photo of the herd of horses galloping loose through the smoke. The chestnut horse in the center of the photo is Dream Police.

He was able to return to racing after the fire but ultimately did not return to his former competitive self. We gave him about six months of pasture time to help him relax and let down. Once he was mentally ready to start retraining for a new job, we sent him to aftercare charity Win Place Home which is a great organization in Canyon Country – near Santa Clarita.

Dream Police did great training and was able to compete in our Thoroughbred Classic Horse Show in December 2018.

Shortly after that, he was adopted to a teenage girl named Sydney who was battling depression and suicidal thoughts. Her parents got him for her to help her mentally. Sydney credits Dream Police for saving her life. They are competitive three-day eventers and he will be with Sydney for life.

Mythical Storm is a 2011 gelding who retired from racing after five-starts and more than $50,000 in earnings. On the track, he was known to be a bit temperamental but he found his true calling as a therapy horse. He settled into his new job very quickly and absolutely adores children.

In the photos and videos below, is Mythical Storm doing session with CARMA’s Executive Director Lucinda Lovitt’s son Joshua who is on the autism spectrum.