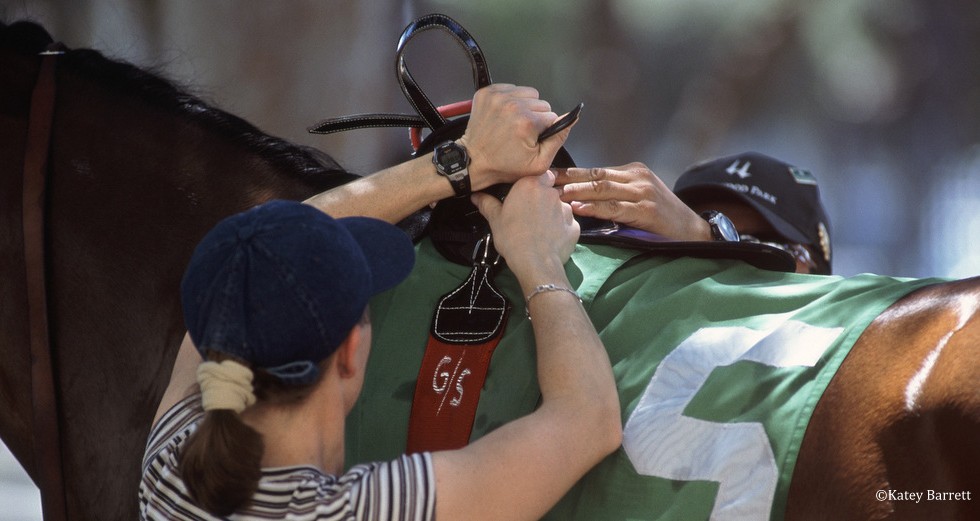 If there’s a psychological break-point in racing – a “wisdom fulcrum” upon which your success as an owner will consistently balance – judging the race that’s right for your horse is IT.

Few owners say it aloud as they watch the owners of a winning horse make their way, smiling, fists raised in victory, to the Winner’s Circle of an important race: “I should be doing that with my horse.” It’s just plain human nature to think it. The best advice is to ignore that magnetic dream. Reality is the road to success, and placing your horses in races that might lack the luster you’d like but can well pay the freight is the first step towards someday making your run to greet a stakes winner of your own. If you insist on running your horse in a race where its morning line is 30-1, it is well to keep in mind that only 4% of all races are won by horses with those odds.

The Racing Secretary “writes” the roster of races based on the preponderance of types of horses residing at the track.

Sometimes, it’s hard to “get real,” not only for the owner, but for the trainer as well. Months of work, hundreds and even thousands of dollars have been committed with nothing but the most optimistic plans. Inherent in the formula, therefore, is the possibility of overreaching, of placing the horse in a race it is unlikely to win.

The most important task of the owner is to balance expectations against reality, enthusiasm against opportunity. Sure, there are times when goals become blurred. After months of intensive work and the expenditure of thousand of dollars, it is hard to accept the fact that, for reasons known only to some higher power, the horse’s competitive level is much closer to the bottom of the ladder than the top.

It may be necessary to risk the horse at a claiming price that will leave red ink on your investment ledger, but for all involved, it is a risk well worth taking. If the alternative is placing the horse beyond its ability to win, then holding on brings headaches and heartburn. You may even find that it is necessary to send your horse to less competitive racing circuits in or out of state.

Buying the horse is the most important decision you make; choosing the trainer right for you comes next – but none of it will work until you can answer the toughest question: “What and when is the next race that’s right for my horse?”

This – an amazingly useful little text – is ordinarily published every two weeks (most often on a Wednesday) and is usually applicable for two weeks. The book is available to everyone, and can be obtained in the office of the Racing Secretary at the track with the current meet. The Condition Book is the basic Bible for the next two weeks of racing, and your trainer, if one of your horses is race-ready, will fall upon it eagerly to find out if there is a race perfectly suited to your horse. This is also the day when jockeys’ agents filter through the backside, making preliminary deals for their “boys” to ride mounts in the listed races.

The Racing Secretary “writes” the roster of races based on the preponderance of types of horses residing at the track. That is, to the extent that there are “maidens” and “claiming horses” stabled at the track hosting the meet, the Racing Secretary will write an abundance of “Maiden” and “Claiming” races to accommodate them. The Racing Secretary, on the other hand, is required by state mandate to write an average of one race per day for California-bred horses only. The Secretary must also accommodate owners by writing an appropriate number of high-purse and “stakes” races, so that owners of the relatively few top-class horses available within the bounds of a “circuit” have a chance to make good on their investments. (Approximately, 26% of all purses paid in any year must be put into the stakes programs).

Though a glance at race description atop each page of the program could easily convince you that Racing Secretaries are pathological obfuscators, if not, downright sadistic, the Racing Secretary’s main role is to painstakingly design races with “a level field” – races, both for the sake of bettors and owners, in which all the horses will be closely competitive.

Theirs is not only an extremely detailed and difficult job, but the Secretaries will be the first to admit that the listed qualifications often seem to present a tangled web. No one – least of all you or your trainer – should hesitate to contact the Secretary for an explanation of any condition that is even slightly unclear. The Secretary’s second main goal is to fill 8-10 races every day: if an owner or trainer hangs back from entering a race because of a confusing condition, and that race then fails to fill, the Secretary’s job just got several hours harder.

There are trainers who consider an owner with a Condition Book as dangerous as an Alien with a Tommy gun. But your understanding of the Book and the whole process of entering can, if you succeed in cracking it, save both you and your trainer frustration, friction and even needless mistrust.

Before looking through the Condition Book, you might want to be certain you are familiar with the correct definitions of terms and titles you’ll be seeing.

These concern the horse’s racing record, sex, age – and sometimes, even color. There are actually races, such as Hollywood Park’s “Gray Cup,” written strictly for grays and roans.

A race with (and sometimes without appreciable) conditions in which every horse entered is available for the prices stated in the Condition Book (as well as the Program). The claiming price is the factor, which keeps a level “field” in these races.

A race with conditions, but without a claiming price. The elaborate “conditions” specified in these races (particularly concerning the horse’s racing record) are the factors which keep the field “even.” In these races, all prior earnings from claiming races – regardless of how much – are disregarded.

An Allowance race in which the basic condition is that the horse has raced within a given time past in a Claiming race with a stated price of “X” dollars or less.

A race restricted to “non-winners of three races (or fewer than 3) of $3,000 other than Maiden, Claiming, or Starter.” In short, what this means is that NO winner of an Allowance Race is eligible for a Closed Race.

Races in which the owners of the entered horsed contribute to the purse or price (usually through a nominating fee and an entry fee).

If the word appears after purse amount, it means that the Racing Association (the track) is “adding” that sum to the owners’ entry fees. The Added amount will go to the winner(s) in addition to the race’s purses.

The Racing Secretary sets conditions and, with a staff committee, assigns weights to each horse individually based on past money won, and whether the horse is an Allowance or Stakes class runner.

Top-of-the-line races which are internationally recognized as such, with Grade III being the lowest and Grade I being the top.

The Racing Association of the current meet in the region “invites” individual horses to compete in a given (promoted) race, without requiring the owners to contribute to the purse.

A special “duel” race (differing from an Exhibition in that it has wagering and purses) put on by a track between two “star” horses.

A race, described in the Condition Book for a particular day, which will be the first to be placed on the official racing card for that day should any of the “listed” races fail to fill.