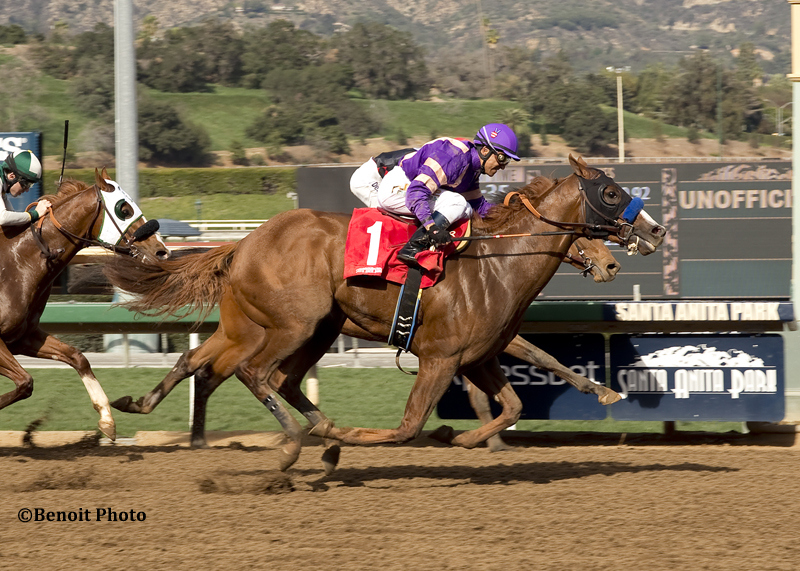 Lord Nelson sat a close fourth with a quarter mile to run and surged late for a neck victory in Sunday’s Grade II, $200,000 San Vicente Stakes for Derby hopefuls at seven furlongs. Conditioned by Bob Baffert, Lord Nelson got the distance in 1:22.15.

Breaking from the rail, Bejarano bided his time around the far turn behind a three-horse spread consisting of Serbian Syclone, Jazzy Josh and Sir Samson. Turning for home, Bejarano swung four-wide and overhauled “Red” right on the money.

“I had a perfect trip,” said Bejarano. “He broke a little slow but then he took off and I was able to find a position right away. I knew (Serbian Syclone, Jazzy Josh and Sir Samson) were going to have speed so I let them go and tried to save ground around the turn.

“I let him go once we were clear. Texas Red was the horse to beat and I was waiting for him. When he came to us I let him go and my horse took off again.”

A Kentucky-bred colt by Pulpit out of the Seeking the Gold mare African Jade, Lord Nelson notched his third win from five starts for his owners, the Peachtree Stable. With the winner’s share of $120,000, he increased his earnings to $249,571.