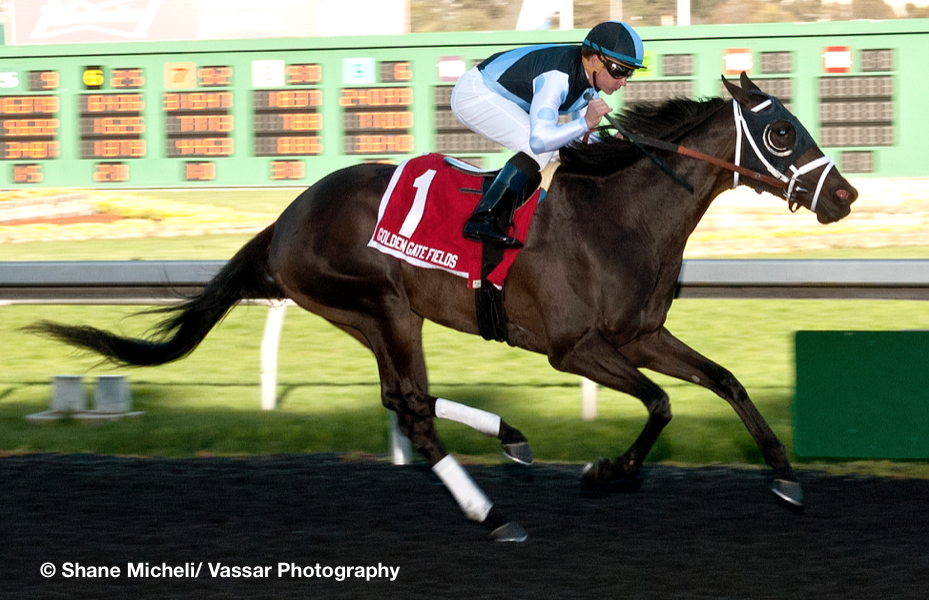 Berkeley, Calif. (Feb. 17, 2017) Under the expert guidance of jockey Drayden Van Dyke, Paved became the first filly to win the prestigious El Camino Real Derby, one of the most notable horse races in Northern California. The El Camino Real Derby, a restricted 3-year-old race, awarded 10 Kentucky Derby points to the winner. Paved is the only filly in the country to hold Kentucky Derby points at this point in time.

“She’s just a Cadillac,” said Van Dyke. “She looked around a little bit towards the end. I think there is more left in there, too. She is very talented.”

After stalking the pace for the first eight furlongs, Paved took the lead in midstretch and held off a late challenge from City Plan and Blended Citizen, both whom came surging late. City Plan, winner of The Gold Rush Stakes in November, finished second for trainer Eoin Harty and jockey Tyler Connor, while Blended Citizen rounded out the Southern California trifecta for trainer Doug O’Neill and jockey Kyle Frey. Mugaritz, runner up in The California Derby last month, finished fourth while California Derby winner Choo Choo completed the Super High Five wager, checking in fifth.

“I thought she ran super today,” stated winning trainer Michael McCarthy. “She got a good position and when Drayden asked her, she responded nicely.”

In her most recent afternoon appearance, Paved raced in a maiden special weight event. That afternoon, the daughter of Quality Road stalked the pace early before drawing off down the stretch to win by five and a half lengths, geared down at the wire. Before her racing career, owners Ciaglia Racing LLC and Eclipse Thoroughbred Partners purchased Paved for $320,000.

With her first stakes win, Paved improved her overall record to 2 wins and 2 thirds in four lifetime starts, with career earnings of $104,640.