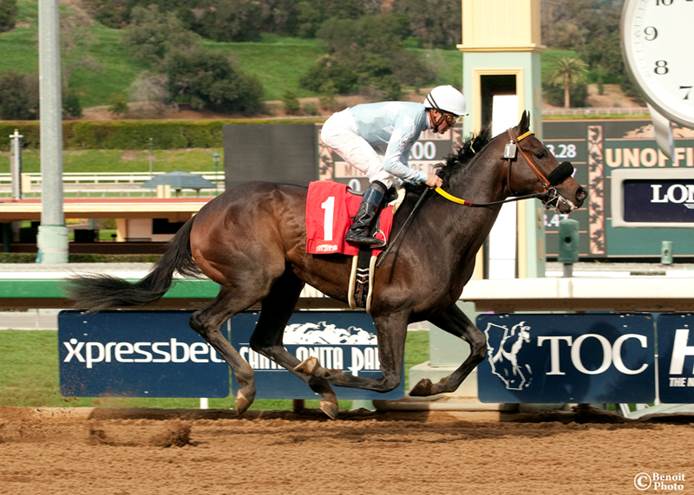 Restrained early and full of run around the far turn, Prospect Park went on to an ultra impressive score in Friday’s $58,000 allowance feature at Santa Anita, as the 3-year-old colt by top stallion Tapit drew off to win by 5 ¼ lengths under Kent Desormeaux while covering a flat mile in 1:35.67.

Owned and bred in Kentucky by Pam and Martin Wygod, the Clifford Sise, Jr. trainee shortened up off a maiden win going 1 1/16 miles on Dec. 27 and thus stamped himself as a potential candidate to the $1 million Santa Anita Derby on April 4 with one of the most impressive 3-year-old performances of the young meeting.

“We want to stretch him back out of course, today was more about conditions,” said Sise. “We wanted to school him, take him back a little bit and it worked out. Now we’ll be looking at different races throughout the country for him and we’ll try to get some Kentucky Derby (qualifying) points…If that goes well, then who knows?”

A close fourth and bottled inside coming to the quarter pole, Desormeaux found a seam three off the rail leaving the three sixteenths pole, and the race was for all intents and purposes, over.

“It seemed like it was over in forty feet and he came home so fast,” said Desormeaux.