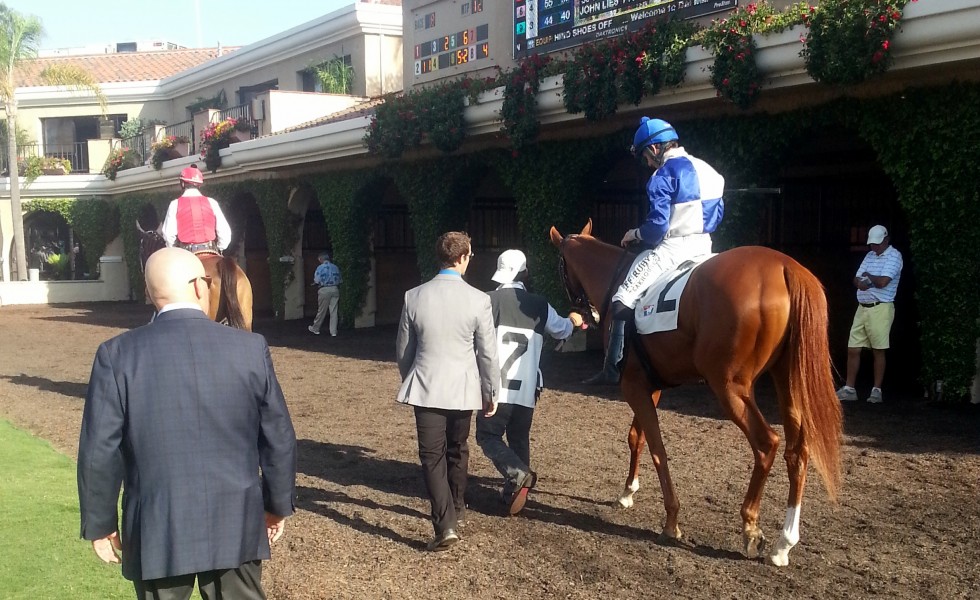 Stidham (left) watches as his runner Every Way heads out to the track for the John C. Mabee Stakes at Del Mar.

Trainer Michael Stidham, a familiar face in the Midwest during the summer months, has brought a string of 12 horses to Del Mar this year. Stidham, a multiple graded stakes winning trainer, wasted little time getting his barn rolling here at Del Mar when he sent out Istanford in the Grade II San Clemente Handicap opening weekend. Istanford dominated a field of 12 on the turf in gate to wire fashion coming home in a final time of 133.83 for the mile.

“The Ship and Win Bonus was a big reason for sending horses,” Stidham said. “There aren’t too many places you can run a maiden for $100,000.” In short, Del Mar’s Ship and Win Program states that a horse that starts at Del Mar this summer and that last ran out of state is eligible for a 33.3% bonus payment on top of purse money in its first race locally. Additionally an automatic $1,000 will be awarded to each horse that last started out of state, including stakes starters.

Del Mar has found increasing success each year with the Ship and Win Program, which is co-funded by the Thoroughbred Owners of California. The program began in 2011, when it attracted 107 horses. That number grew to 137 horses in 2012 and reached a high of 149 horses in 2013. This in turn also helped increase average field size from 8.4 in 2011 to 8.7 in 2012 to 8.8 horses last year. Once again Ship and Win starters are expected to increase for this year’s meet.

While purses are declining in other jurisdictions, California has much to offer the Thoroughbred horsemen and owners. The Thoroughbred Owners of California, along with the rest of the California racing community, is consistently looking to increase the daily purses while bettering the racing in the state. The Ship and Win Program is just one instance of how California can continue to improve the racing product.