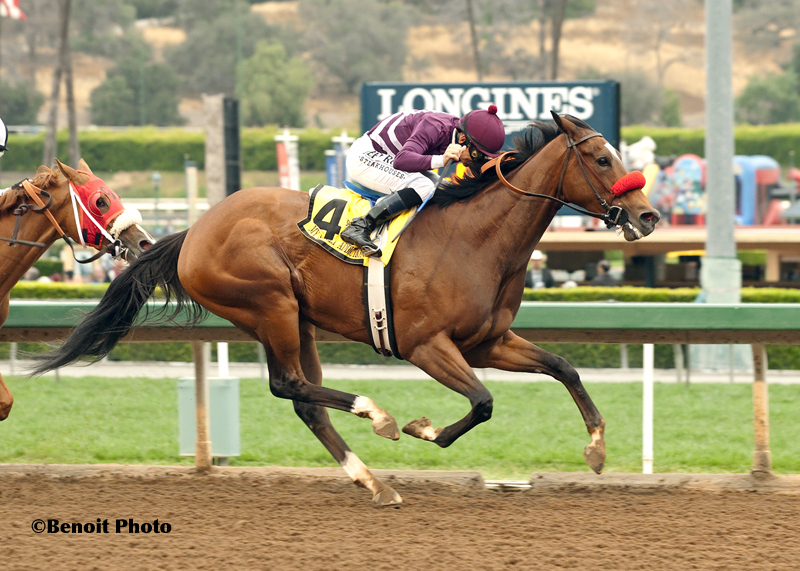 Pamela Ziebarth’s homebred My Sweet Addiction registered a major upset in Saturday’s Grade I, $300,000 Vanity Stakes, as the 5-year-old mare by Tiznow set all the pace under Mike Smith en route to a one length win while covering 1 1/8 miles in 1:49.73.

Trained by Marty Jones, My Sweet Addiction, who broke from post position three, repelled the challenge of 1-9 favorite Warren’s Veneda, who came to her inside approaching the quarter pole, but came up short, finishing third under Tyler Baze.

“With her and especially in this race, we let her decide what strategy she wanted to use,” said Smith. “We’ve found that if you just get along with her, she runs better, whether that be on the lead or just off of it…After the scratch of Beholder (due to illness on Thursday), it certainly played out the way I thought it would. We controlled the speed and it was just a matter of if she was going to bring her ‘A’ game and she brought her ‘A+’ game today.”

With two time Eclipse Award winner Beholder out of the race, there was no show wagering and a staggering $301,848 was bet to place on Warren’s Veneda, generating huge place prices. Off at 9-2 in a field of four older mares, My Sweet Addiction paid $11.20 and $17.20.

“Mike rode a great race,” said Jones. “Finally, things fell into place. It was a long journey getting her here. She had some problems where she was getting out real bad, and we’ve always wanted to run her long, but she kept having trouble with the turns…Everything worked out well…Sometimes things go that way, you know? My mare had a great trip. The pace wasn’t too hot, Mike had her right where he wanted to be.”

Ridden by Flavien Prat, Brazilian-bred Gas Total flew from last to wrest the place from Warren’s Veneda by a head. Off at 7-1, Gas Total paid a whopping $22.00 to place.

Breaking from the rail with Baze, Warren’s Veneda, who entered the Vanity on a three-(stakes) race winning streak, appeared to put a head in front three sixteenths out, but was outrun late.

They went way too slow,” said Baze. “I had a good trip, we got to save ground and my mare really ran good, but the winner just had a lot left.”

Initiated at the now-shuttered Hollywood Park in 1940, the Vanity was contested for the 74th time on Saturday and was run as the fifth race on a nine-race program.