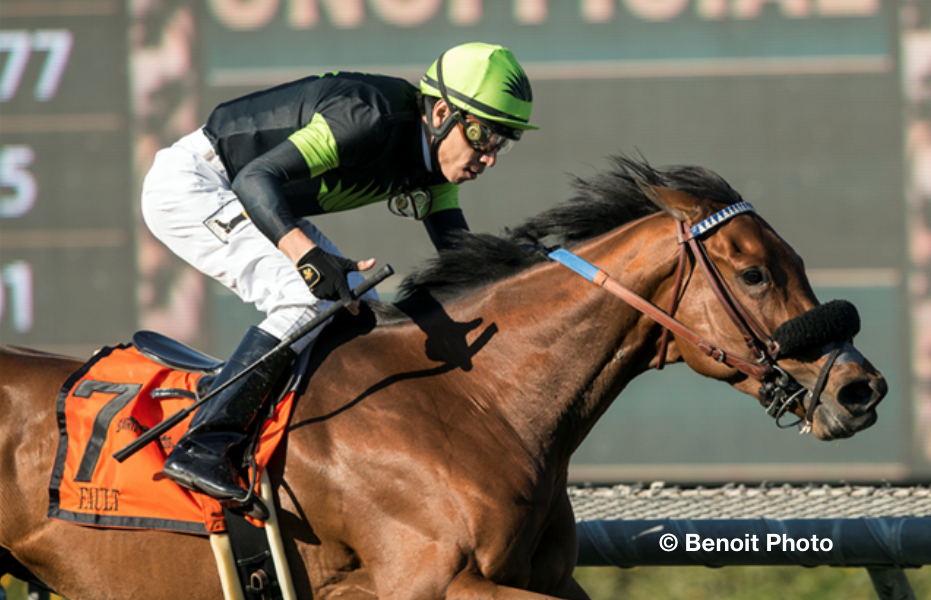 LONGSHOT FAULT RALLIES TO TAKE GRADE II, $200,000 BUENA VISTA STAKES BY ONE LENGTH UNDER RED-HOT FRANCO; TRAINED BY D’AMATO, FAULT GETS MILE ON GRASS IN 1:33.49

ARCADIA, Calif. (Feb. 17, 2018)—Under patient handling from an upstart Geovanni Franco, longshot Fault charged home to take Saturday’s Grade II, $200,000 Buena Vista Stakes by one length. Trained for the first time by Phil D’Amato, Fault, who was previously based in the Midwest, got a mile on turf in 1:33.49 and won going away.

Sixth in a field of nine older fillies and mares with five sixteenths of a mile to run, Franco saved ground at the rail and rallied just to the inside of tear-away leader Juno to post an impressive victory in her Southern California debut.

“I was trying to get there first,” said the understated Franco, who registered his third consecutive win on the Saturday program. “I knew that if there was a little bit of room, she would do it. She’s a great filly and she had the run in her.”

A Grade III winner on grass at Arlington Park five starts back on Aug. 12, Fault, a 4-year-old Kentucky-bred filly by Blame, came off a fourth place finish in a minor one mile turf stakes at Fair Grounds in New Orleans on Dec. 30.

“I knew she was a very consistent filly and was only getting better back east,” said D’Amato. “She had a bad trip at Fairgrounds but from the very first time I breezed her, I thought, ‘This is a horse I’ve been looking for in this category for quite a while.’”

Ridden by Rajiv Maragh, Thundering Sky saved ground early while attentive to the pace and managed to run down a stubborn Juno late to take the place by a head. Off at 12-1, Thundering Sky paid $14.40 and $9.60.

Irish-bred Madam Dancealot, the 2-1 favorite under Corey Nakatani, was well back off the hot pace but wasn’t able to take advantage of it as she ran fifth, beaten about 2 ½ lengths for the win.

Racing resumes with a nine-race card on Sunday at Santa Anita. First post time is at 12:30 p.m. and admission gates open at 10:30 a.m.

GEOVANNI FRANCO, FAULT, WINNER: “Well I knew she is a nice filly. She’s been running in some nice stakes and placing in them. She just changed coasts and I guess she’s liking it because she seemed to today. She felt very good, just came out and took care of business.

“I was trying to get there first. I knew that if there was a little bit of room, she would do it. She’s a great filly and she had the run in her.”

PHIL D’AMATO, FAULT, WINNER: “I knew she was a very consistent filly and was only getting better back east. She had a bad luck trip at Fairgrounds (fourth in her last start on Dec. 30 going a mile on turf) but from the very first time I breezed her I thought, ‘This is a horse I’ve been looking for in this category for quite a while.’

“She’s shown me a lot in the mornings and she trained like she belonged in here. You never know until you run against these girls in here and she showed that she fits.

“Geovanni breezed her in her last work. I’ve been watching him ride for the last couple of weeks and I’ve been very impressed with his grass rides. He just gets it. He saves ground and gets a lot out of these horses. With the lineup that was coming into this race, all the jockeys were already taken and I thought it was a perfect time to give him a chance and he rewarded us with a great ride.”

GARY FENTON, LITTLE RED FEATHER RACING, FAULT, WINNER: “We’ve liked this filly for a long time. We had been watching her run and when we contacted Mark Martinez (of Agave Racing Stable), he was agreeable to bringing her out here with Phil (D’Amato). We may try her on the dirt. We like to do it. We’ve done it with Midnight Storm and we might do it with this filly.” 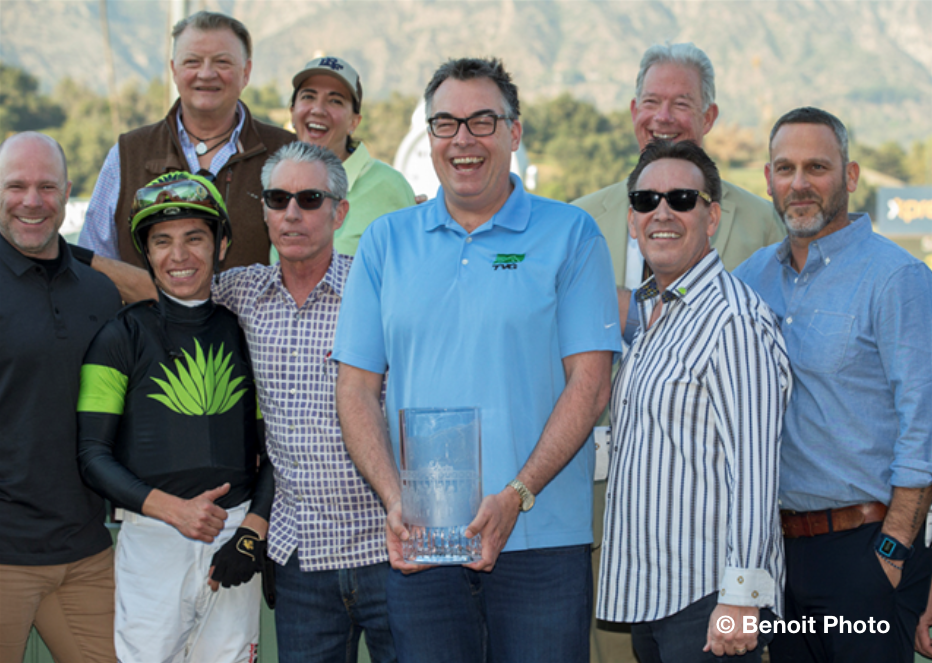