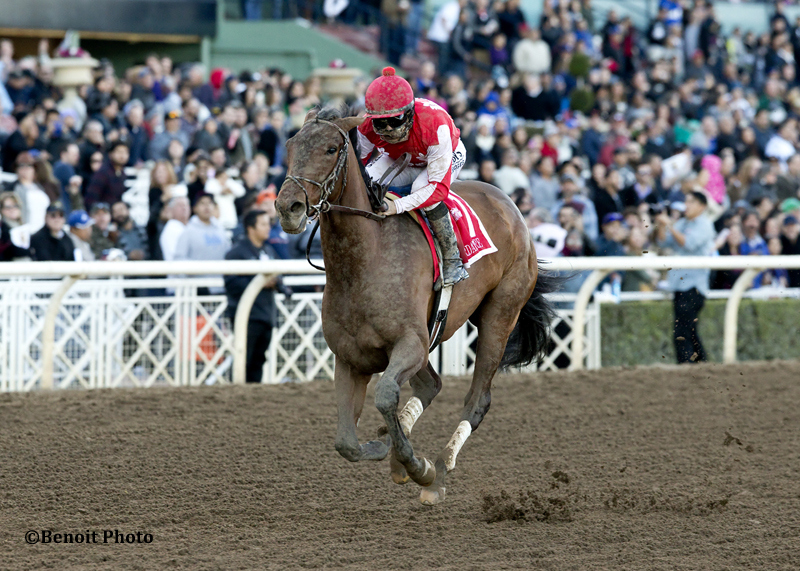 ARCADIA, Calif. (Dec. 26, 2015) — Breaking last from the rail in a field of nine 3-year-old fillies, the Dale Romans-trained Birdatthewire flew late under Mike Smith to take Saturday’s Grade I, $300,000 La Brea Stakes by a half length, as she covered seven furlongs in 1:22.31.

Fourth in the Grade II Falls City Handicap at Churchill Downs Nov. 26, Birdatthewire, in her first-ever appearance at Santa Anita, was off at 10-1 and paid $23.80, $10.00 and $5.80. A Kentucky-bred daughter of Summer Bird, Birdatthewire is now a perfect two for two at seven furlongs and has four wins from 11 overall starts.

“I think it was the perfect combination,” said owner Tom Camp on behalf of Forum Racing IV. “Mike Smith is known for his liking to take horses (to the) outside, and we got out there with some room to run. When we came into the stretch, I thought we had a decent chance to catch Hot City Girl.”

Run as the seventh race on a nine-race card, the La Brea was the third of four graded stakes on Santa Anita’s Winter Meet Opening Day.