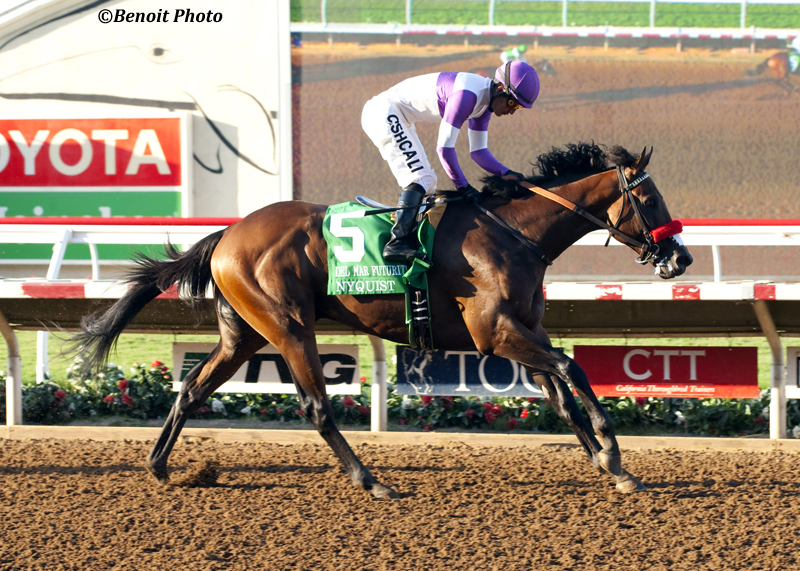 J.Paul Reddam’s unbeaten Nyquist, the 1-2 favorite piloted by Mario Gutierrez, projected himself into the national picture as a force among two-year-old males this year with a brilliant victory in Monday’s Grade I $300,000 Del Mar Futurity, closing-day headliner of the 2015 summer season.

Nyquist, a son of Uncle Mo, surged to the lead in the upper stretch, drew out and never was threatened in winning by three and three-quarter lengths in 1:23.28 for the seven furlongs. It was his third victory in as many starts and his second stakes success this summer, having won the Best Pal Stakes a month ago.

The Del Mar Futurity is the event American Pharoah used as a springboard a year ago to his successful career culminating in an historic sweep of the 2015 Triple Crown.

Swipe, second to Nyquist in the Best Pal, finished second again, rallying well under Kent Desormeaux to be four and one-quarter lengths clear of third-place Blameitonthelaw in the field of six juveniles. Withdrawn from the original line-up were Mt Veeder and Nightly News.

Nyquist climaxed a memorable afternoon of racing for Reddam and trainer Doug O’Neill.  Earlier in the day, at Saratoga race course in New York, Reddam-owned and O’Neill-trained Ralis won the Grade I Hopeful Stakes under jockey Javier Castellano. Nyquist also provided Reddam with his 13th victory either as a sole owner or in partnership this Del Mar season. O’Neill also trained the winner of Monday’s sixth race, Where’s The D, a $71 winner owned in partnership by Reddam with ERJ racing.