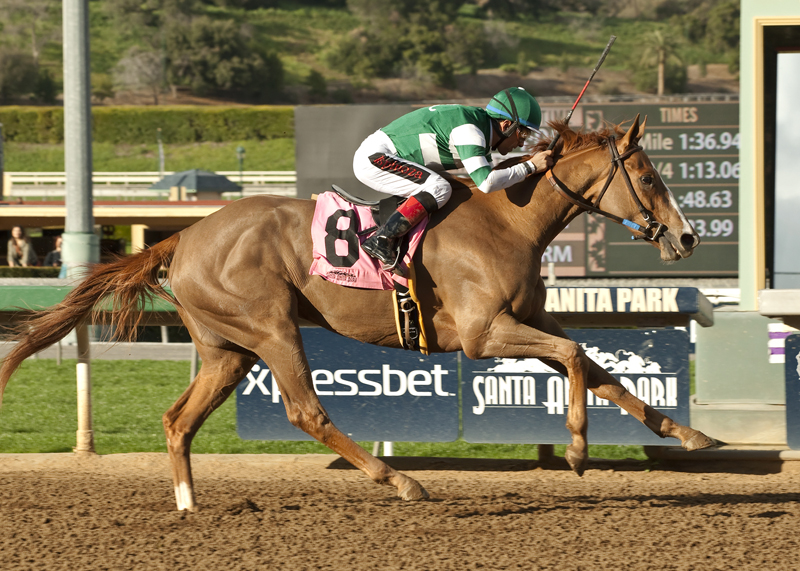 Photo by Benoit.  ARCADIA, Calif. (Feb. 28, 2015) — A one mile maiden winner on Dec. 18 at Laurel Park in Maryland, Stellar Wind burst upon the Southern California racing scene on Saturday at Santa Anita, as she motored to an impressive 2-3/4 length win in the Grade III, $100,000 Santa Ysabel Stakes under Victor Espinoza. Trained by John Sadler and owned by Hronis Racing, LLC, she swung four-wide turning for home and easily bested favored Light the City while covering 1-1/16 miles in 1:43.16.

When asked if the Grade I Santa Anita Oaks (1-1/16 miles on April 4) might be a consideration for Stellar Wind, Sadler replied, “That would be a logical spot at this point… I think she’s going to be better at a mile and an eighth, a mile and a quarter.”

One of three Jerry Hollendorfer entrants, Light the City, who came off a second place finish in the Grade I, one mile Las Virgenes on Jan. 31, sat second throughout under Kent Desormeaux at 2-1 and paid $3.60 and $2.40.

Stellar Wind picked up 50 qualifying points for the Grade I, 1-1/8 miles Kentucky Oaks (to be run May 1), while the second, third and fourth place finishers each received 20, 10 and five respectively.