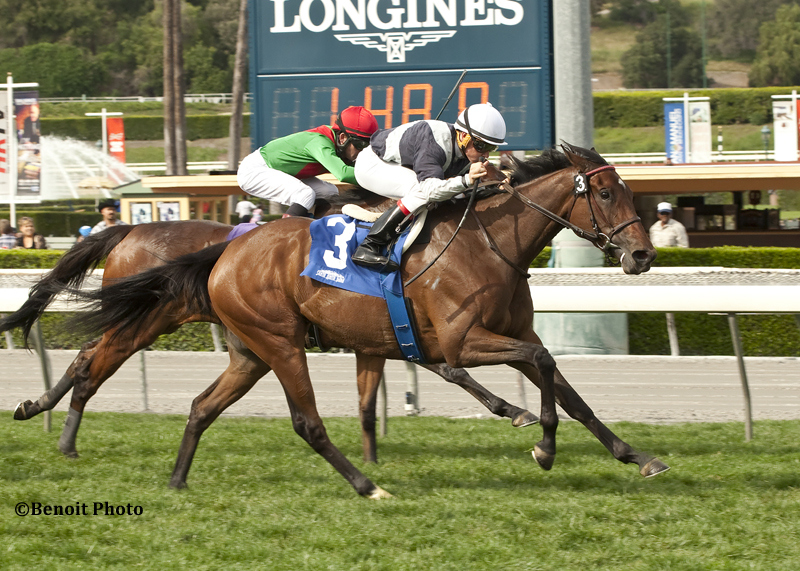 With longshot Rusty Slipper cutting out fractions of 25.19, 49.56 and 1:13.73, Three Hearts took command approaching the quarter pole and opened up a one length advantage on the winner while getting one mile in 1:37.43. From there, Van Dyke tracked the winner three-wide turning for home and gained the advantage well inside the sixteenth pole.

“Today, right out of the gate, I was set up perfect,” said Van Dyke, who is now two for two aboard Hoop of Colour. “She broke well. The only other speed was Three Hearts and the other (Graham) Motion (trained) horse, Rusty Slipper. I got right behind Rusty Slipper and my horse threw her ears up and she was so relaxed. Near the half mile pole only two horses were in front of me, so I got out, stayed off Three Hearts’ hip and I had clear sailing from there.”

A minor stakes winner in England last July, Hoop of Colour, who is out of the Unbridled mare Surya, got her first graded stakes win and improved her overall mark to 6-4-1-0. The winner’s take of $120,000 increased her earnings to $173,751.

“She’s a really nice filly, and all (of her) family, three or four of them, have been graded stakes winners,” said Alice Clapham, assistant trainer to Motion. “She’s shown a lot of talent since she’s been here… I’m sure Graham will talk to the owners… We might run her back here that mile and a quarter turf race (Grade III, $150,000 Santa Barbara Handicap on April 18) or she might go to Keeneland.”