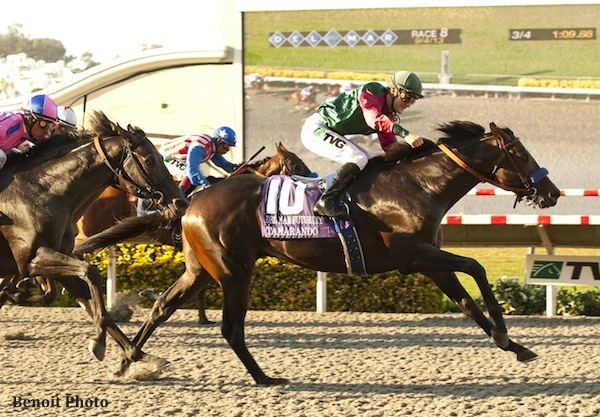 The 75th summer season of Thoroughbred racing at Del Mar comes to a rousing conclusion Wednesday (Sept. 3) with a 10-race program topped by the traditional closing-day feature, the Grade I $300,000 Del Mar Futurity for the swiftest two-year-olds in the West.

Skyway, impressive victor in the 6 ½ furlong Best Pal Stakes a month ago, heads a field of nine juveniles in the seven-furlong sprint which is carded as the ninth race. Corey Nakatani has the mount on Skyway, a New York-bred son of Sky Mesa who figures to be a solid betting choice. He broke his maiden at Keeneland last April at Keeneland and then was third in the Bashford Manor at Churchill Downs prior to coming to California with the barn of trainer Mark Casse.

Among Skyway’s rivals is Henry’s Holiday, a rallying second in the Best Pal who should appreciate the added sixteenth of a mile of the Futurity. Tyler Baze again has the call from trainer Doug O’Neill. The Harlan’s Holiday colt was a winner first time out at Santa Anita and finished fourth in the Santa Anita Juvenile.

Coming into the Futurity off maiden race victories are Inexcess Time, with Joe Talamo and Red Button, Rafael Bejarano.

Trainer Bob Baffert, an 11-time winner of the Futurity, has two hopefuls in the line-up, the maiden American Pharaoh, with Victor Espinoza up, and Holiday Camp, a maiden winner who was sixth in the Santa Anita Juvenile.

Three horses parlayed victory in the Del Mar Futurity to success in the Kentucky Derby – Tomy Lee, Gato Del Sol and Silver Charm, while Canonero II and California Chrome ran in the Futurity and won the “Run for the Roses” the following spring.

There are three supporting features on Wednesday’s card, the $90,000 Pirate’s Bounty Stakes at six furlongs for older horses, the $90,000 added C.E.R.F. Stakes, also at six furlongs, for older fillies and mares, and the $100,000 Oak Tree Juvenile Turf at one mile on the grass for two-year-olds.

Post time for the first race Wednesday will be 2 p.m