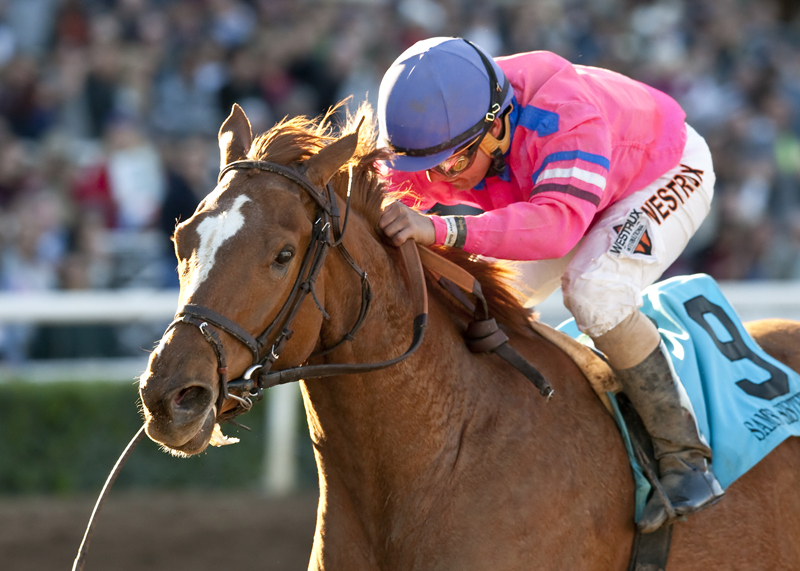 “It’s nice to knock off a Grade I on opening day,” said Hollendorfer. “We were afraid of the one-horse (Taris), but we didn’t want to duck her. She was well meant, so I think we beat a really nice filly…We had confidence in (Sam’s Sister) from her first couple of victories. We’ve always liked her.

“I just told him (Trujillo) I thought the three path was really good today and that he had an ideal post and he should try to be there, but I think he went outside. He did a good job and the end result was good so I’m very pleased.”

Owned by Mark Dedomenico, LLC, Hollendorfer or Todaro, Sam’s Sister paid $27.00, $7.80 and $4.20. Winning for the fourth time in five starts, she picked up $180,000 for the win, which increased her earnings to $307,450. Out of the Include mare Kittery Point, Sam’s Sister provided Brother Derek, a winner of the Grade I Santa Anita Derby in 2006, with his first Grade I stakes winner.

“I had a perfect trip,” said Trujillo. “I could see there was a lot of speed in the race…Three or four horses went to the lead and I sat covered up a little bit and in the stretch…The last sixteenth, I could see Rafael (Bejarano, aboard Taris) working and I could see her tail flapping so I knew I had it. I came flying and I caught them right away.”

Taris, who came off a pair of scintillating victories at Keeneland and Presque Isle Downs in upstate Pennsylvania, broke from the rail appeared to have the La Brea in her grasp a furlong from home.