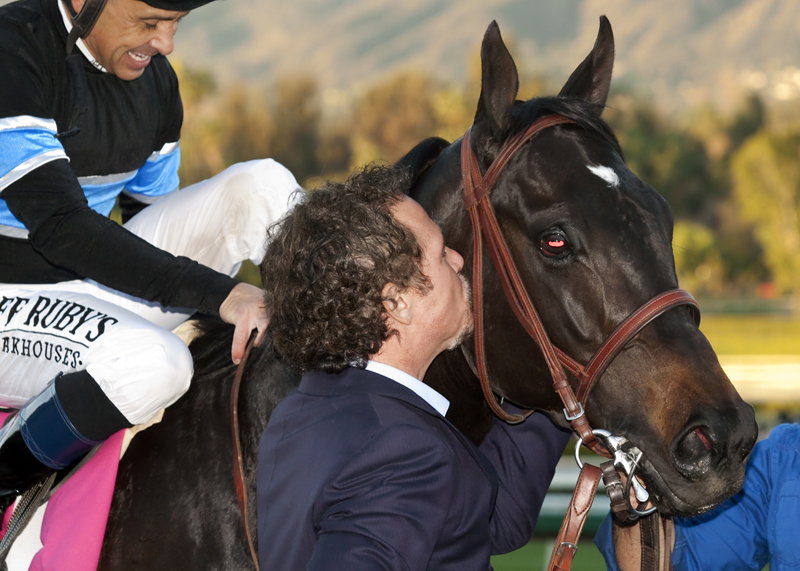 ARCADIA, Calif. (Dec. 26, 2014) — Back in action for the first time since suffering his first career defeat in the $5 million Breeders’ Cup Classic, trainer Jerry Hollendorfer’s Shared Belief demonstrated the heart and class of a champion as he took Santa Anita’s opening day Grade I, $300,000 Malibu Stakes by a neck under Mike Smith, covering seven furlongs in 1:20.69. Fourth as the 5-2 favorite following a controversial start in the Classic, last year’s 2-year-old Eclipse Champion Male was a close third turning for home in the Malibu and prevailed in a driving finish over longshot Conquest Two Step and 2-1 second choice Chitu.

“He broke extremely well today which I was really, really happy with,” said Smith, who was aboard the 3-year-old gelding by Candy Ride for the fifth consecutive time. “He didn’t go real quick the first quarter mile, but we really picked it up (and) from then on, it was a horse race. I don’t know if people really understand how difficult it is to go from a mile and a quarter back to seven eighths. It’s really hard to do. It takes a special kind of horse—he’s that and maybe more.

“I truly believe he would be undefeated right now if you take the start of the Breeders’ Cup Classic out of it. I got beat three lengths and I lost at least seven or eight leaving the gate and on down the track…I certainly would have liked to have seen us undefeated right now and then there wouldn’t be a question about Horse of the Year.”

“I’ve got a nine-year-old (son) who says good times never get old,” said Rome, who is one of America’s most readily recognized sports-talk personalities. “I’ve done this long enough to fully appreciate what it means to have a horse who’s a Grade I stakes winner and we don’t take it for granted.”

Hollendorfer, who dead heated with John Sadler for leading trainer at the most recent Santa Anita Winter Meet, got off to a flying start on Friday, as he also took the Grade I La Brea earlier in the day.

“He was sitting in a good spot and he was in between horses, but really, I was watching and never had any doubts that he would get out and come running down the lane,” said Hollendorfer. “Once the horses have been getting on the outside today, they’ve been running very well. We’re looking at a couple of different things and I’ll talk it over with Alex and with Jim and my other partners and we’ll try and make a decent decision (as to whether or not to run in the Grade II, 1 1/8 miles $500,000 Santa Antonio Stakes and a possible rematch with California Chrome and Breeders’ Cup Classic winner Bayern on Feb. 7.)”

Breaking from the rail and off at a whopping 72-1 with Joe Talamo up, Conquest Two Step was head and head with the winner around the far turn and proved second best, finishing a half length in front of Chitu and Joel Rosario. A Florida-bred colt, Conquest Two Step paid $21.80 and $6.80.

Sent from his number two post position, Chitu was shadowed into and around the far turn by Indianapolis and finished 1 ½ lengths in front of his stablemate, paying $2.80 to show.
(Santa Anita press release)