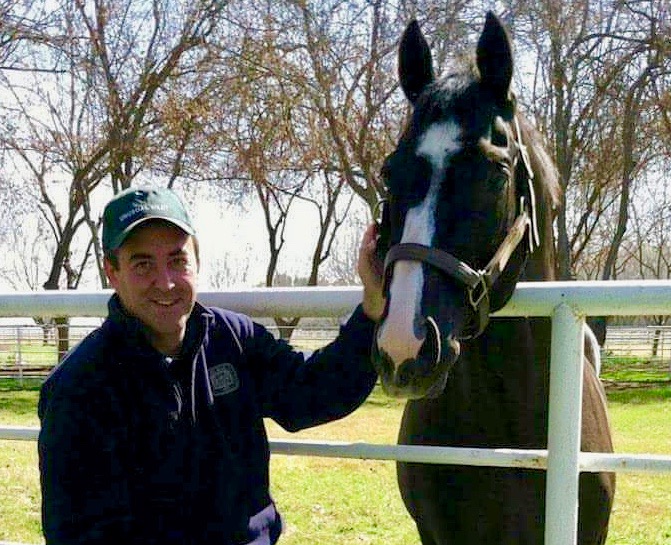 May 18, 2017 – Coalinga, CA – Unusual Heat, the All Time Leading Sire in California Progeny Earnings has passed away at 27 due to complications from arthritis induced laminitis.

“It is with a very heavy heart that I have to report the passing of Unusual Heat today”, said Harris Auerbach, managing partner of the Unusual Heat Syndicate. “He gave so much to racing, breeding and Thoroughbred Retirement here in California. He provided the impetus for Cal-breds to be at the forefront of California Racing with runners that filled fields and raised the quality standard of the state breds during his era. He was also the driving force behind the creation of CARMA which has led to millions of dollars of funding for our retirees here in California. He will be sorely missed, especially to those of us who loved and admired him.”

Co-owner and former trainer Barry Abrams remarked about Unusual Heat, “He’s done more for California racing than anybody. His legacy will continue forever.”

And finally, co-owner Madeline Auerbach on Unusual Heat- “I will miss him sorely. He has been part of my family and life for the last 20 years. Being a part of him is a gift and a blessing that cannot be replicated. What his stature and presence has allowed me to do for retired thoroughbreds is incalculable.”

Bred in Kentucky by John T.L. Jones, Jr., Unusual Heat was the son of Nureyev and Danish Champion mare Rossard. In 1991, he became one of the highest priced horses ever sold at a Barrett’s yearling auction fetching a price of $250,000.  He went on to race both in Europe and The United States under the tack of trainers Dermot Weld, Richard Mandella and Barry Abrams. He was a multiple listed stakes winner who finished with a career record of 16-6-2-2 and career earnings of $142,605.

Where Unusual Heat made his indelible impact was in the breeding shed. Under the ownership and management of Auerbach and Abrams, Unusual Heat stood his first season at Walter Greenman’s Farm in Hemet, CA before moving to Old English Rancho in Sanger, CA where he spent the bulk of his early stallion career. In 2010, he moved to John C. Harris’ Harris Farms in Coalinga, CA where spent the last 6 seasons of his career at stud and finished his career covering 30 mares in his 19th and final season in 2016.

The impact of Unusual Heat on California Breeding and Racing was far reaching during his career. From a humble first crop of 15, Unusual Heat had 11 runners and 10 of them won in their first start starting a ride like has never been seen in the Golden State. To date, his runners have amassed $54.3 Million in worldwide progeny earnings. He has produced 12 graded stakes winners (5 G1 winners),  54 overall stakes winners, 18 additional graded stakes horses and an astounding 157 earners of over $100,000 and 81 earners of over $200,000 out of just 572 starters.  He has won 6 California Leading Sire Championships and is still the reigning California Conceived Leading Turf Sire with 13 straight championships (2004-2016).

An important part of Unusual Heat’s story is his impact away from the races and the breeding shed in California. His rise to stardom as stallion and the success of his runners gave Madeline Auerbach the impetus and the stature to start raising awareness about thoroughbred retirement and taking care of the sports equine athletes after their careers were over. Through her election to the Thoroughbred Owners of California Board of Directors, Auerbach was able to work with the California Horse Racing Board on the formation, certification and funding of CARMA- California Retirement Management Account funding thoroughbred retirement in California. Using Unusual Heat and his progeny as inspiration, under Auerbach’s leadership CARMA has granted over $5 Million to racehorse retirement, placement and retraining since 2008.

A final chapter to the story of Unusual Heat is his impact on California Racing and Breeding. Doug Burge, longtime President of the California Thoroughbred Breeders’ Association remarked “He’s been the perennial leading sire in California for over a decade and his influence on CA breeding and racing through his sons and daughters will be prevalent for years to come.  I take pride in the fact that I was able to play a small role in the early decisions that led to his dominance as the best sire to ever stand in the state.”

Unusual Heat holds the All-time record for progeny wins in a single Santa Anita Meet, a single Del Mar Meet and turf wins at both major Southern California race tracks. He is the only known sire to have a “Superfecta” of runners in a Santa Anita Allowance race when four of his daughters ran 1-2-3-4 in a Maiden Special Weight on January 6, 2011. Along those lines his progeny have filled California fields and been instrumental in the success of California Racing Programs such as the Golden State Series and Cal-bred Maiden bonus programs.

Unusual Heat is currently represented by 6 sons at stud, 5 of whom stand in California along with Unusual Suspect in Australia. He is also making an impact as a broodmare sire with 7 graded stakes winners since 2015 including 2 grade 1 winners and 2017 Grade 3 Transylvania Stakes Winner Big Score.  His impact will be felt for years to come.