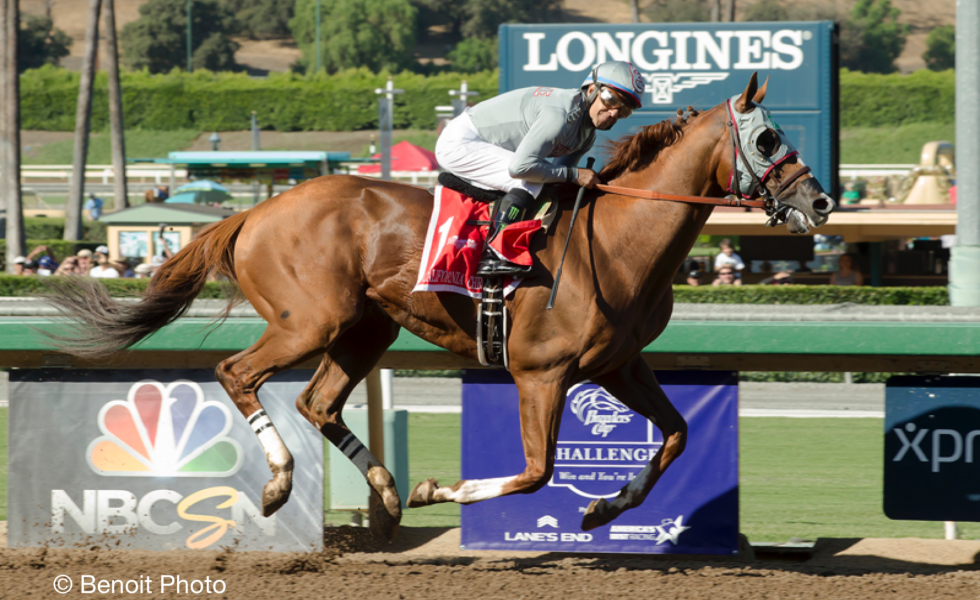 ARCADIA, Calif. (Oct. 1, 2016)—Superstar California Chrome was sensational yet again at Santa Anita on Saturday, taking the Grade I, $300,000 Awesome Again Stakes in gate to wire fashion by 2 ¼ lengths over rival Dortmund, who pressured him early. Ridden by Victor Espinoza and trained by Art Sherman, California Chrome covered 1 1/8 miles while geared down in 1:48.07, and thus served notice to the world that at age five, he is the horse to beat in the $6 million Breeders’ Cup Classic at The Great Race Place on Nov. 5.

Breaking from the rail, the California-bred son of Lucky Pulpit was hustled out of the gate as Dortmund, adding blinkers and to his immediate outside, was sent as well by Rafael Bejarano. The pair were separated by a neck into and around the Club House turn and Espinoza with a look to his outside, stepped on the gas at the 4 ½ furlong pole and the Awesome Again, was for all intents and purposes, over.

“Dortmund wasn’t a threat today,” said Espinoza. “Maybe after the first quarter mile, but after that, I just kept pulling away, which only helped me get some breathing room between us and the rest of the field. It’s tough when I get the one-hole and want to try and do something crazy…I ran the first part fast, yes, but then eased up on him. I didn’t want to overuse him today, we’ve got a big race coming up. It seemed like he was doing everything today very easily. Hopefully he’ll run big in the Breeders’ Cup.”

Fresh off a five length win (from the rail) in the Grade I Pacific Classic at Del Mar on Aug. 20, “Chrome” notched his sixth consecutive win and improved his overall mark to 24-15-3-1. Owned by Perry Martin and Taylor Made Stallions’ California Chrome, LLC, he picked up $180,000 for the win, increasing his record bankroll to $13,432,650.

“I can’t say enough about the ride—it was just perfect,” said Sherman, 79, himself a former jockey. “We have a great staff with the groom and the hot walkers, Dihiji (Gladney), who rides him in the mornings and my son (Alan) who lives with him. I’m just really blessed.

“When he gets in front, he’s a hard horse to get by, and I knew he’d wear Dortmund down with the fractions the way they were. He took his game plan away from him. (Dortmund ) tried and ran a hell of a race, but you’re looking at maybe the best horse in the world right now. I can’t say enough about (California Chrome).

“I’m looking forward to the Breeders’ Cup Classic and I hope everything goes according to plan. Each race seems a little bit better. It’s a little scary. It’s a dream come true. I never had the ability to buy the most expensive horses…Maybe it was just my time to shine. I’m enjoying it and I’ll enjoy seeing his babies years from now.”

Dortmund, winner of the 2015 Santa Anita Derby and trained by Bob Baffert, kept to his task throughout and finished 4 ½ lengths in front of longshot Win the Space.

With the win, California Chrome earned a fees-paid berth in the Breeders’ Cup Classic.