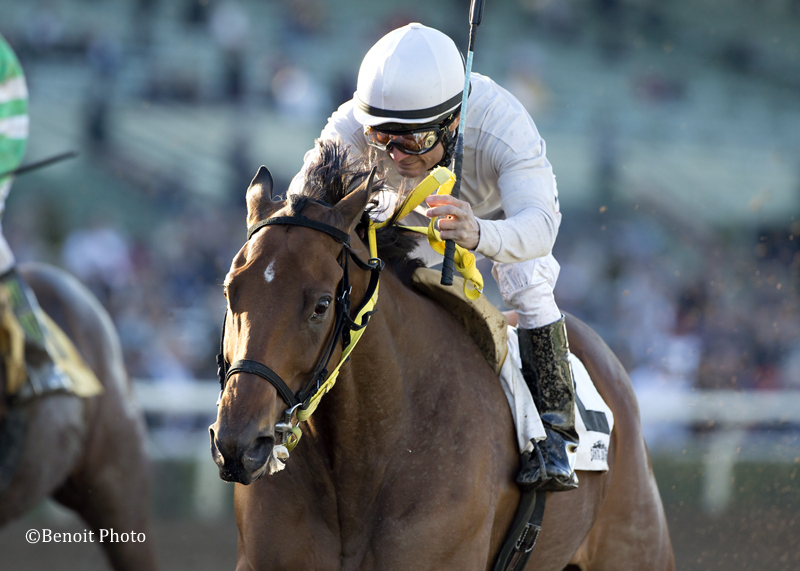 Breaking from the inside in a field of six older sprinters, the 6-year-old gelding by Surf Cat, who was bred by trainer Bruce Headley, trained by his daughter, Karen, and owned by his wife Aase’s Matson Racing, was hustled from the gate and settled nicely in second going into the far turn. Sitting behind fractions of 21.72, 44.00 and 1:08.53, San Onofre, who was put into a vigorous drive leaving the three eighths pole, took charge a furlong out and held off favored Salutos Amigos late. Off at 4-1, San Onofre paid $10.00, $4.40 and $2.60.

“Really good way to start the New Year, my daughter did a helluva job,” said Headley, who held forth in the Winner’s Circle beneath his customary felt-tipped cowboy hat. “I’m more excited for Alex than I am myself. Alex has a lot left in him, which he showed today. Me, I’m on borrowed time (with a wry grin).”

As for where the lightly raced San Onofre might re-surface, Karen Headley indicated he’d probably run next in the $150,000 Donald Valpredo California Cup Sprint for Cal-breds at six furlongs on Jan. 30.