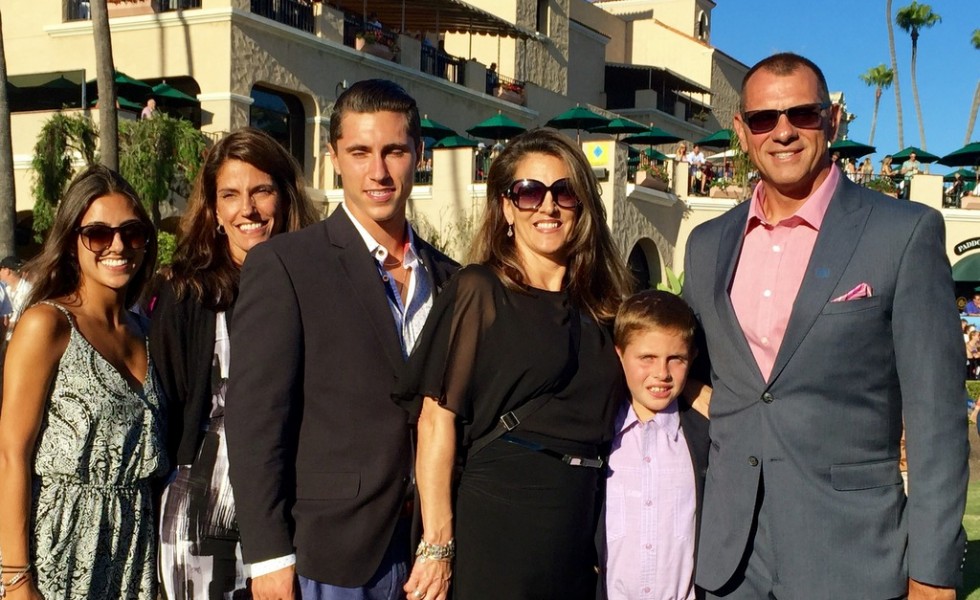 The family of owner Michael House posed for a photo in the Del Mar walking ring Friday afternoon to watch their runner Big John B. as he was saddled for the Grade 3  $100,000Cougar Handicap. Big John B, winner of 12 of 28 career starts on grass, including the 2014 Del Mar Handicap, showed another dimension to his ability as he scored his first victory on a dirt surface with a come-from-behind triumph in the day’s feature race. He is trained by Phil D’Amato,

With Rafael Bejarano in the saddle, Big John B rallied on the rail entering the stretch and outgamed 12-1 longshot Bailoutbobby in the final furlong to score by a half-length in 2:31.62 for the mile and one-half. Big John B had competed twice on dirt early in his career without finishing in the money.

“He trained so well on the dirt track at Santa Anita and just as well on the dirt track here at Del Mar,” said D’Amato. The distance was right. The timing was right to get him a prep for the Del Mar Handicap (of which he’s the defending champion). We took a shot. Rafael (Bejarano) said they put him in tight at the quarter pole but it didn’t bother him, he bulled his way through and won with something left. The Pacific Classic is definitely not out of the realm of possibility but right now I’d say we’re leaning more toward the Del Mar Handicap.”

Sky Kingdom, the 6-5 favorite, was in front turning for home but faltered in the stretch to be third, four and one-quarter lengths back of the runner-up and a half-length in front of Lideris. Cat Burglar, the pacesetter until the far turn, was fifth and last as the 3-2 second choice. Scratched were Point Piper and Solid Wager.

Bailoutbobby, who was piloted by Flavien Prat, paid $7.60 and $2.80, while Sky Kingdom, second in the Cougar the past two summers, returned $2.20 to show.