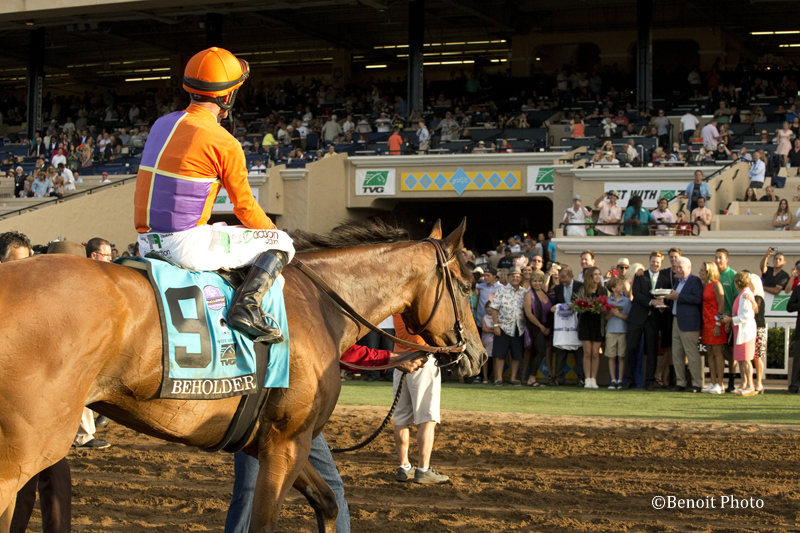 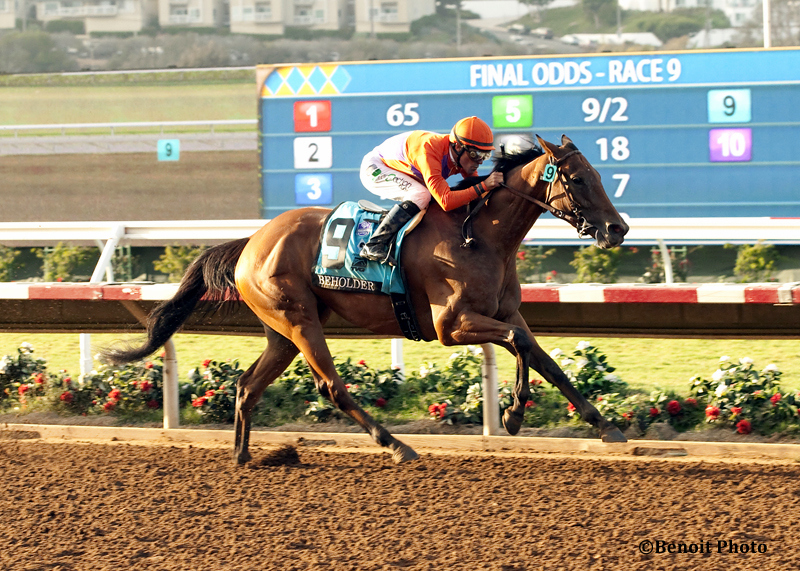 B. Wayne Hughes’ Beholder, a two-time Eclipse Award champion, became the first female to win Del Mar’s signature race of the summer season, the Grade I TVG Pacific Classic, in a performance for the ages as she won the mile and one-quarter event by a dazzling eight and one-quarter lengths under jockey Gary Stevens.

Breezing to the front on the far turn without being asked by Stevens, Beholder disposed of dueling pacemakers Bayern and Midnight Storm in a matter of several strides to open a commanding lead entering the stretch. Under no pressure from her rider, the five-year-old mare, a champion at two and three, widened on her nine male rivals to score by eight and one-quarters. It was the second largest winning margin in the 25-year history of the race, exceeded only by Game On Dude in 2013.

Catch a Flight, stablemate of Beholder from the barn of Hall of Fame trainer Richard Mandella, put in a solid late run under Flavien Prat to be second, a length in front of Eastern invader Red Vine who was ridden by Joel Rosario. Fourth was Hoppertunity, followed by Imperative, Hard Aces, Class Leader, Bailoutbobby, Bayern and Midnight Storm.

Beholder, a daughter of Henny Hughes, was scoring her 14th win in 19 starts and ninth in her last ten races. Earlier this season, she won the Grade I Clement L. Hirsch Stakes. First money of $600,000 Saturday increased her career earnings to $4,256,600. Her time for the distance was a fast 1:59.77.

Beholder was the fifth female Thoroughbred to run in the Pacific Classic, preceded by Paseana, fifth in 1992; Island Fashion, ninth in 2005; Amani, sixth in 2012, and Byrama, seventh in 2013.

For Mandella, Beholder provided his fourth win in the Pacific Classic. He won memorably in l996 with Dare And Go who upset Cigar, in 1997 with Gentlemen when he also saddled the place horse, Siphon, and Pleasantly Perfect in 2004.

Owner B. Wayne Hughes of Malibu, CA, and Spendthrift Farm in Lexington, KY said after the race, “I’ve had a few good horses in the past. Always had a happy time and enjoyed it. But she is the first horse that makes me feel lucky to be the owner. I’ve never had that feeling before. I think it’s called pride.”