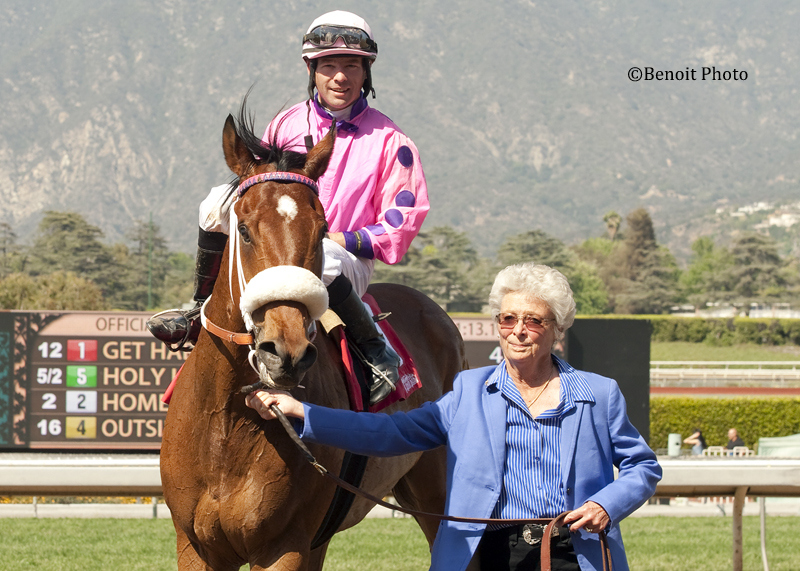 Colorado-bred Get Happy Mister, idle since Aug. 16 at Arapahoe Park, rated kindly and roared up the rail to take Sunday’s Grade III, $100,000 San Simeon Stakes by a length under Tyler Baze. Conditioned by Mark Tsagalakis and owned by his mother-in-law, Annette Bishop, Get Happy Mister covered 6 ½ furlongs down Santa Anita’s hillside turf course in 1:13.11 while providing Tsagalakis with his first-ever stakes win.

“This is my first stakes win,” said Tsagalakis, 52, who by his accounting has been training “probably close to 25 years. I’ve won some races, but never a stakes. Right now, there weren’t a lot of choices…It was time to rock and roll. The race came up, he was ready to go and we were eligible for it. It was like ‘Let’s give it a try.’ We had him out on the turf the other day, he seemed to like it and he did.

“The plan is (for the horse) to go back home to Colorado and then come back here in the fall and run here again. We’ll play it by ear, but that was the original plan and we’ll just enjoy it for now…”

“It looks like he can do anything, he loves to run,” said Baze, who had never been aboard Get Happy Mister before. “When (pacesetters) Pure Tactics and Sweet Swap hooked up in front of me and opened up five, I knew they were flying. I just took my time…He’s so big and strong and he has a huge stride. He’s just a really classy horse.”

“I bought him at a 2-year-old sale in Arapahoe,” she said. “He’s been a joy. I don’t know his limits and after today, I have no idea. I’m just amazed that he did as well as he did today. He’s been training out of his skin. It’s all due to Mark, he takes his time. He takes his pulse every two hours.”

The 5-2 second choice in the wagering, Holy Lute, who was ridden by Mike Smith, was on terms with the winner a furlong out, but proved second best, finishing a length in front of favored Home Run Kitten. Holy Lute paid $4.00 and $3.20.